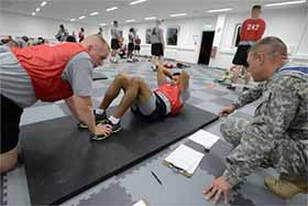 When I was in school, sit-ups were my least favourite exercise. Now, many years later, I finally feel vindicated. The US Army is considering phrasing out sit ups due to too many spinal injuries. This is hardly surprising when you watch the average person attempt a sit-up. People tend to put a lot of strain through their neck, there arms are often in the wrong place and it just looks really uncomfortable.

When you try a sit-up next focus on not being able to see your elbows out of the corner of you eye or not tensing your neck muscles...oh and try to remember to breathe too! It's really difficult. Now maybe you should just say no to more sit-ups!

An editorial from the Navy Times recently called for sit-ups to be banned completely. It called them an ‘outdated exercise today viewed as a key cause of lower back injuries’. The US Marine Corps is also reviewing its physical fitness and body composition standards – in an attempt to improve fitness and reduce injuries.

The Canadian Armed Forces has already phased out sit-ups; Canadian soldiers now lift 44-pound sandbags instead. Stuart McGill, a professor of spine biomechanics at the University of Waterloo in Canada said that dozens of studies showed that sit-ups can squeeze the discs in the spine. Over time these discs can bulge, pressing on nerves and causing pain.

Instead of sit-ups or crunches, fitness trainers say men and women should replace them with the plank pose, which is when you stay in the upward part of a push-up.