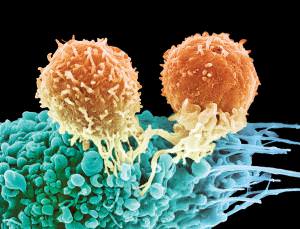 A new cancer treatment brings great hope to patient.s More than half of terminally ill blood cancer patients experienced complete remission in early clinical trials using modified cells from their immune system, reported The Guardian last week.
Speaking at the annual meeting for the American Association for the Advancement for Science (AAAS), researcher Stanley Riddell said: “This is unprecedented in medicine, to be honest, to get response rates in this range in these very advanced patients.”
Many of the patients in the trials had been given 2 to 5 months to live and exhausted all other options.  To administer the T-cell therapy, doctors remove immune cells from patients, tagging them with “receptor” molecules that target a specific cancer, as other T-cells target the flu or infections. They then infuse the cells back in the body to let them do what they are supposed to do originally - recognise and destroy foreign matter in the body.
In one study, 94% of participants with acute lymphoblastic leukaemia (ALL) saw symptoms vanish completely. Patients with other blood cancers had response rates greater than 80%, and more than half experienced complete remission.
“T-cells are a living drug, and in particular they have the potential to persist in our body for our whole lives,” said researcher Chiara Bonini, a haematologist at San Raffaele University in Milan.
However, at present, T-cell therapy is considered an option of last resort because reprogramming the immune system can come with dangerous side-effects, including cytokine release syndrome (sCRS) – and overload defense cells. Twenty patients suffered symptoms of fever, hypotension and neurotoxicity due to sCRS, and 2 died, but the researchers noted that chemotherapy had failed in all the patients who participated in the new trials.