Bacon, sausages and smoked meat are as bad for you as smoking, according to the World Health Organisation (WHO). It placed cured and processed meats in the same category as asbestos, alcohol, arsenic and tobacco, due to its causal link with bowel cancer. 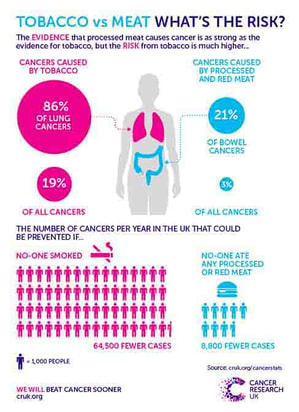 After deliberating for a year, experts from WHO's International Agency for Research on Cancer concluded that each 50-gram (1.8-ounce) portion of processed meat eaten daily increased the risk of colorectal cancer by 18%. WHO also ranked red meat as “probably carcinogenic to humans”. Eating red meat has been linked to pancreatic and prostate cancer.

It doesn't matter whether the salami is organic, home-made or commercial,  it's the processing of the meat, or chemicals naturally present within it, that increases cancer risk. ​For those of us enjoying the new fad in smoked meats and American BBQ meals, this comes as a great blow! So what should we do?

Firstly you need to look at how much meat you eat in a day. You will be surprised just how quickly it adds up! Bacon for breakfast, some ham or tuna with your lunch, meat and three veg for dinner (if you are like the vast majority of Australians)...it is a lot. 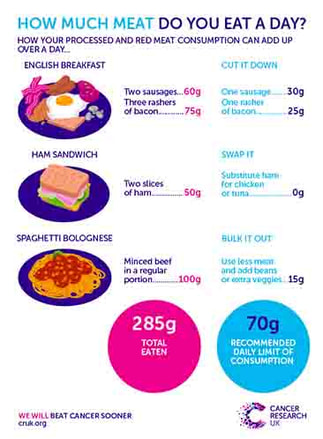 If you find it hard to give them up completely, the first step is to reduce the amount of processed meat you consume. Also, substitute other white meat or vegetable protein instead of processed or red meat. Hot-smoked salmon, for instance, is delicious! The rest is common sense: Eat plenty of fibre, fruit and vegetables, exercise, limit your alcohol intake, and don't smoke!