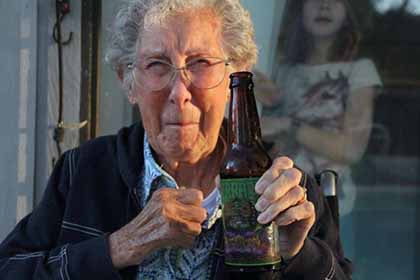 Last month, the ABC reported on an unusual senior who was going on a trip of a lifetime. For the last 6 months, 90-year-old Norma has been traveling around the USA in a campervan with her son Tim and daughter-in-law Ramie.  Norma, who hails from Michigan, decided to travel after being diagnosed with uterine cancer.
Her best options included surgery, radiation and chemotherapy. Having just watched her husband pass away earlier that week in hospice care, Norma made the difficult decision to forgo treatment and instead spend the rest of her life pursuing one of her great loves.
"I'm 90-years-old, I'm hitting the road," she told her doctor.
While Norma is not in pain, the family said they did worry in the beginning whether the trip was irresponsible. "[One doctor] begged her to follow through with 'traditional' treatment, saying: 'Don't you want to live to be 95?," Ramie said.
Another fully supported the decision. "As doctors, we see what cancer treatment looks like everyday," he said. "Intensive care units, nursing homes, awful side effects — honestly there is no guarantee she will survive the initial surgery to remove the mass. You are doing exactly what I would want to do in this situation. Have a fantastic trip!"
You can follow Norma on her facebook page. She was invited to be part of a St Patrick's Day parade last week, and before that, she got her first ever pedicure!