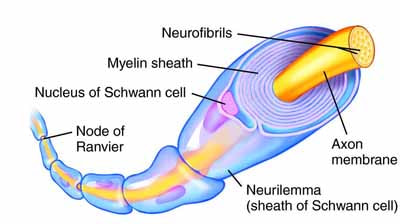 Scientists in Ireland have discovered a link between the mix of microbes in our gut and how our nerves work. The microbes are able to influence the production of myelin, a layer that protects the nerves and speeds transmission. In Multiple Sclerosis (MS). there is loss of this myelin which affects muscle and nerve functioning.

There is more than a kilogram of bacteria and other micro-organisms living in our gut and collectively they are referred to as the microbiome. In the last few years, scientists have found that this microbiome influences our immune system, obesity, bowel disorders and mental health.

We should not be surprised by this, given bacteria inhabited the Earth long before humans, said Prof John Cryan, who led this most recent study.

“The bacteria were there first in term of evolution. We have co-evolved with them and the brain evolved in this environment. Our brains have developed with signals from the microbes all the time.”

In this case they used a “germ free” mouse, studying the mix of genes being expressed, and found there was a lot of activity from myelin-related genes. However, when these mice were given a normal microbiome the myelin genes reduced their activity, but if the germ-free status was returned myelin production increased again.

“We believe we demonstrate for the first time that the microbiome is necessary for appropriate and dynamic regulation of myelin-related genes,” Prof Cryan said.

For another fascinating take on MS and food, head to MS Hope where you can watch the documentary Living Proof, which is a fascinating insight into how one family inspired a whole new movement in diet and MS treatment.