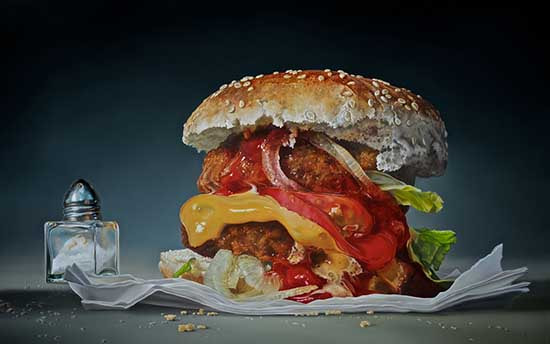 Would you believe new research shows that hunger is all in the mind and that dieting makes it worse?

Weight loss advice tends to be one of two things : Fewer calories in, more calories out or do more exercise. However, we are ignoring something that can cause results to vary vastly - our brain.

Psychologist and novelist Michael Graziano writes in the Aeon that hunger is like a mood. He says: "Hunger is a process that’s always present, always running in the background, only occasionally rising into consciousness. When it slowly rises or eases back down, even when it’s beneath consciousness, it alters our decisions. It warps our priorities and our emotional investment in long-term goals. It even changes our sensory perceptions – often quite profoundly."

For instance, when you are hungry, the burger on your plate looks tiny, already, you are thinking of having another one. But when you are full, the same burger may look enormous. Dr Graziano, who is a professor of neuroscience at Princeton University,  says: "It isn’t just the food itself. Your own body image is warped. When the hunger mood rises, you feel a little thinner, the diet feels like it’s working and you can afford a self-indulgence. When satiety kicks in, you feel like a whale."

Ironically, the very act of trying to lose weight makes us more likely to put weight on. We may have enough self control to eat smaller main meals, but we forget how much we snack. And the same goes for exercise. If we've done a big session at the gym, we might whisper to the chocolate chip muffin, yes I've earned you today.

Dr Graziano writes: "The obesity epidemic is not an issue of calories or willpower. I began to suspect that our problem with obesity is a problem of poisoning the normal regulatory system. We possess a system that’s intricate and beautifully calibrated. It evolved over millions of years to be good at its job. It should work in the background without any conscious effort, but for more than two-thirds of us it doesn’t. "

For over a year, he experimented with his own diet and lost over 20kg.  He noticed that 3 bad habits appeared to consistently boost his hunger. He calls them the super-high death-carb diet, the low-fat craze, and the calorie-counting trap.

He said: "The super-high death-carb diet has become normal US fare. We get up in the morning and eat a croissant, or pancakes with syrup, or a muffin. Or cereal and milk. The cereal is all carbs. Then comes lunch. Suppose I’m unhealthy and eat a fast-food, McDonald’s lunch. We think of it as greasy food, but beyond the grease the burger has a bun and the ketchup is sugar paste. The fries are all carbs. The large soda is sugar water. The grease is only a tiny part of the meal. Maybe you feel morally superior and prefer a ‘healthy’ lunch, a deli sandwich that’s mainly French bread. And chips. And a Snapple. All carbs."

A low-carb diet makes you lose weight because you eat less. Or (perhaps more accurately), the ridiculous, super-high death-carb diet stokes up the hunger mechanism and your eating goes out of control.

As numerous studies have now established, fat reduces hunger. Take it away and the hunger mood soars. It’s not a simple relationship, and the effect is gradual as the hypothalamus learns associations over time.

But the most insidious attack on the hunger mechanism might be the chronic diet. The more you try to micromanage your automatic hunger control mechanism, the more you mess with its dynamics. Skip breakfast, cut calories at lunch, eat a small dinner and you poke the hunger tiger. All you do is put yourself in the vicious cycle of trying to exert willpower and failing.

Dr Graziano said: "In some ways, the hunger system is like the breathing system. The brain has an unconscious mechanism that regulates breathing. Suppose that system got shut down so that it was up to you to consciously control your own breath, adjusting its rate and depth depending on factors such as blood oxygen, carbon dioxide level, physical exertion, and so on. What would happen? You’d die in about 10 minutes. You’d lose track of the necessities.

"The intellectual, conscious mind is not really good at these matters of regulating the internal environment. It’s better to leave the job as much as possible to the dedicated systems that evolved to do it. What you can do with your conscious mind is to set the general parameters. Put yourself in a place where your automatic systems can operate correctly. Don’t put a plastic bag over your head. Likewise, don’t eat the super-high death-carb, low-fat diet. Don’t micromanage your brainstem by counting every calorie. You might be surprised at how well your health self-regulates."