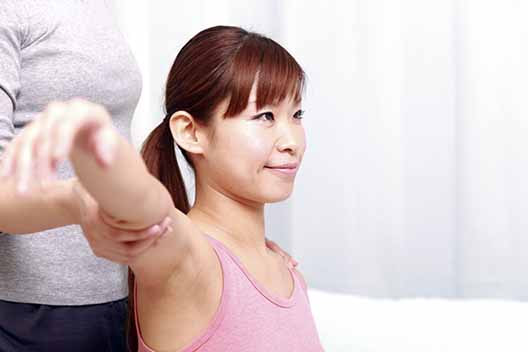 Frozen shoulder or adhesive capsulitis is a common condition where the shoulder becomes painful to move for no apparent reason and can last years. Suddenly, simple things like brushing your hair, doing up your bra or other household chores become impossible.

Although the condition affects around two million - mostly women between the ages of 40 and 60 - doctors still know little about it and often don’t refer patients soon enough for treatment.

Two years ago, UK journalist Vivenne Parry wrote about her experience in the Daily Mirror. She described: "The slightest knock to my arm would set off an intense spasm in my shoulder that hurt so much it made me feel sick. I became sleep deprived, as the pain was much worse at night, and my shoulder just didn’t want to move as it should. It was incredibly stiff and getting my jacket on became increasingly difficult.

"Soon, I could hardly raise my arm at all. I couldn’t dress without help or even put a phone to my ear. Worst of all for me, I could no longer garden or swim."

What is frozen shoulder?

Frozen shoulder occurs when the joint capsule becomes thickened and inflamed. This causes the space inside to shrink, restricting movement in the joint and causing pain. This capsule also contains lubricating fluid to enable bones in the joint to slide smoothly over each other. In frozen shoulder, the amount of lubricating fluid reduces by a third, which further restricts mobility and increases pain. The inflammation can cause thick bands of scar tissue to form within the joint, also hampering movement.

The initial trigger for this inflammation is still unknown. As more women are affected, and most have recently gone through the menopause, some experts say changing levels of hormones may be to blame for this connection between frozen shoulder and menopause. However, women who go through early menopause do not seem to develop it at an earlier age.

There is also a range of other conditions that make it more likely,  including under and overactive thyroid, heart problems, diabetes and previous injury to the shoulder. Poor posture, particularly round-shouldered hunching, is also thought to increase the risk, and genetics may play a role.

Once you’ve had the condition in one shoulder, you almost never get it there again — but there is about a 10  per cent risk that you will get it in the other shoulder. Frozen shoulder can cause severe pain and loss of movement for up to 3 years. After this time, it often gets better of its own accord but as osteopaths, we say to get it treated as soon as possible. When your shoulder is stiff and painful, other parts of your body have to compensate and it can throw everything else out of whack.

Steroid and saline injections have been shown to be effective in the short term, but these must be delivered at specific points in the joint, and studies suggest if they are not done under X-ray guidance, 70 per cent will miss their target.

You can also do simple exercises at home, in conjunction with treatment, to speed up your recovery.