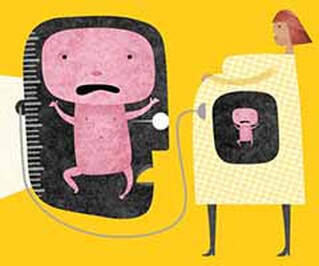 Katy was planning a natural delivery but when an ultrasound suggested her baby could weigh up to 5.2kg, her doctors advised her to have a cesarean section. At the birth of her son Sam, everyone was surprised, he clocked just 3.2kg on the scales, Her doctors were so surprised that they weighed him twice to make sure it was no mistake.

Katy, now 37, told The New York Times she now sees the surgery as unnecessary and claims it caused Sam to have breathing troubles at birth, a complication more common in c-section babies. Katy is not alone. Research has shown that only 1 in 5 US women who were told that their babies might be getting quite large actually delivered infants weighing more than 4kg (the medical definition of a large baby).

However, mothers who believed they were having a large baby were 5 times more likely to ask for a cesarean. They were also twice as likely to have other interventions like a medical induction.

Telling mothers their baby will be large "has a profound effect, and contributes to undermining women's confidence they can deliver the baby," said Dr Eugene Declercq, one of the authors of the paper, published in Maternal and Child Health Journal last month. In both the US and Australia, nearly 1 in 3 babies are born by c-section.

The 2014 guidelines from the American College of Obstetricians and Gynecologists urge caution in the use of ultrasounds to estimate fetal weight, as scans can be imprecise during the 3rd trimester. Dr Aaron Caughey, who helped develop the guidelines, said he has seen many doctors offer a c-section even when the estimated birth weight is under 4 kg.

While it is important for doctors to share information with their patients, Dr Caughey says the mere act of offering a c-section influences women's decisions. "If you are offering something that isn't normally provided, you are somehow saying that this is a pretty good option," he said.

There are real dangers in natural or vaginal births if the baby is large. There is a risk of the head emerging but the shoulders getting stuck, and this can result in nerve damage to the baby's arms. However, c-sections are also associated with increased risks, longer recovery time for the mother and can limit her future childbirth options.

If you want to find out more, childbirth connection has a wide range of topics concerning birth, or you can speak to a doula or go to some really awesome birth classes (online or in person).